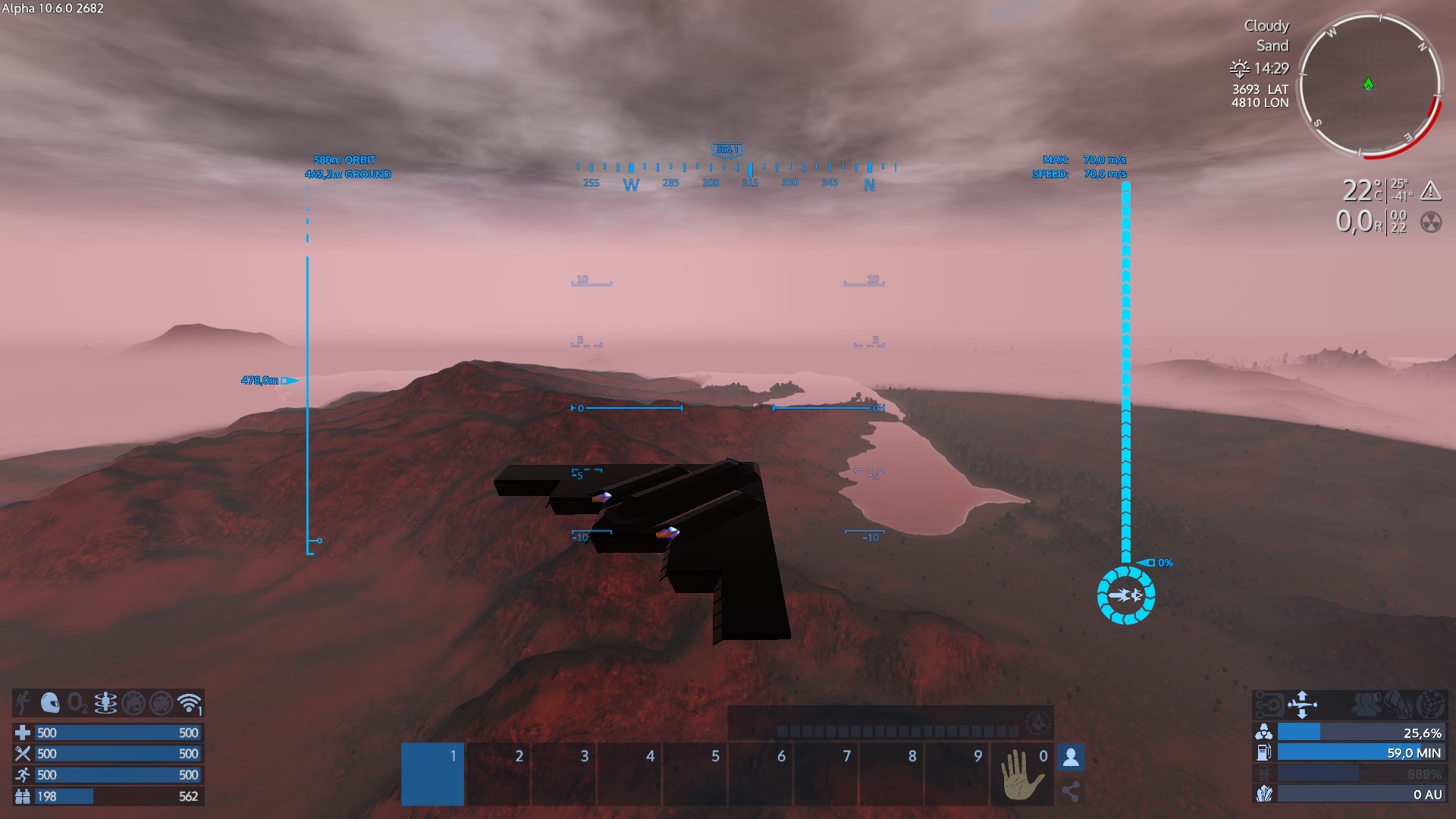 Most of you will have heard already about the features that are coming in Alpha 10.6, like the CPU, the new Flight Model, HV-to-SV docking and more.

Without further ado, some important general info on the CPU system and their use in the Experimental version.

The primary goal of adding the CPU system was to add a way to allow some basic specialization and an additional way to balance vessels in regards of thrust, RCS, weaponry and other parameters. Other features, added alongside CPU, will support that goal and open up alternative approaches. For example with 10.6 you do not necessarily need a (CPU costly) RCS anymore, because the position of thrusters will gain you a decent torque as well and the new aerodynamics lift/drag model will allow for SV designs, that can lift off on planets (with an atmosphere) by having only back-facing thrusters - without the need of any additional side, up or down thrusters!

In this context, there are a few important info you need to know about:

Note: When resuming a 10.5 savegame, CPU system is off. We recommend to start a new savegame for EXP anyhow, due to all the other feature updates and POI changes (f.ex. The QuantumSTAR traders you can get the components for the CPU Extenders, will not be available in resumed 10.5 games!)

Please read the detail-info thread about CPU (and the other new features) BEFORE starting into the Experimental version: https://empyriononline.com/forums/faq-feedback.25/ :)

Main Features & Additions of Alpha 10.6
As always in an Experimental phase:
- Please read through the pinned and ‘Showcase WIP’ marked INFO threads before starting a game (these threads are also the place for discussions about a feature!):
https://empyriononline.com/forums/faq-feedback.25/
- Please make good use of the feedback threads for your actual EXP GAMEPLAY feedback (not for discussions): https://empyriononline.com/forums/experimental-features-discussion.35/

Thanks a lot in advance for reporting any bug and issue in our bug-forum over here: https://empyriononline.com/forums/bugs.34/

Before making a bug report, please read about how to use the bug section: https://empyriononline.com/threads/read-before-reporting-bug-report-template-requirements-known-issues.47118/

Also, ahead of reporting any issue, please have a quick look at the KNOWN ISSUES
https://empyriononline.com/threads/read-before-reporting-bug-report-template-requirements-known-issues.47118/#post-290341

Please note that the Experimental phase will last at least 2 weeks.

PS: Also do not forget to check out our awesome Empyrion Galactic Survival Soundtrack, composed by Alex Jordon! Enjoy! https://soundcloud.com/empyrion-game/reposts

Full Changelog
NOTE: Version of Config.ecf has been increased! Please review and adapt your modifications!

Base Attack
- Zirax attack Hacking Swipe has been reduced to 8-10m
- Zirax attack troopers have gotten a new behavior: When they are stuck, they will start to wander around (Patrol behavior) and check if their target (core) is in range once and a while.
- Hacking swipe for Talon Shaman has been removed
Note: both changes are TEMPORARY changes. More changes are planned for A11 release (Change of attack pattern, targets, damage balancing)
- Added new particle effect for Talon Shaman (visible during Talon Base Attack)

Other additions & changes
- Ship controller : add a small force in all directions on HV in space (for docking ability; HV can move in space with a max speed of 3 m/s)
- Rockets that are fired from a moving ship now always inherit the speed of the ship (additional)
- Docked ships are now considered when calculating the total weight of a structure
- Enhanced Blueprint Workshop: in Creative Mode structures with "forbidden blocks" can be published as POI's; they are tagged accordingly and can be used in the Workshop search bar!
- Added type name and custom tag checkboxes to Blueprint Publish dialog
- Doubled "Steer your Escape Pod" message display time from 5 to 10 seconds
- updated playfield of "Invader vs Defender II" scenario
- SSG: Improvements to Sector Type parameter settings
- CtrModifier key now configurable

New/updated POI
- Added new SNOW versions for Civil and Polaris POI to be used on Snow-Playfields
- Added new group of orbital Wreckages (BAs, but also a CV and a SV) for all orbits except starter orbits
- Updated non-snow POIs (Civil Settlement-B)
- Updated the Default CREATIVE Scenario ORBITAL BASE start with an all new Starter Base that now offers all the necessary info to get started with building and creating awesome stuff in Empyrion. The Base also has a goodie spawned nearby to toy around with.

Server
- Playfield server outputs INFO line now for each loaded playfield
- adapted the 'stoppf' command to multi-pf servers: when more than one pf is loaded only that one is unloaded

Dedicated.yaml:
- The two (helper) parameters Srv_Visible and Srv_ForceHiding should no longer be used. The only valid parameter to determine public visibility is Srv_Public. So please, replace them if you still use them.
- If none of the above mentioned parameters is in a yaml file, the server is by default visible, so if you want your private server to not be visible simply add a line "Srv_Public: false".

List of Bugfixes
- CoQ from global effects manager -> Solar panels
- Fixed bug with player digged out areas in far terrain not showing correctly
- Fixed: [Coop] 'AllowedBlueprints: None' is not being added in the dedicated.yaml in Coop mode
- Fixed: Terrain placeable devices (Portable constructor & water generator) get removed after terrain under them is drilled
- Fixed: Can’t connect to LocalDedi => App not Running
- Fixed: When drilling an ore deposit with or without a PD the drill can stop drilling until the cursor is moved again
- Fixed: [MP] Replace mode not showing changes made in creative MP until structure is respawned
- Fixed: NPC's stop moving when they 'fall' from a structure into space/orbit
- Fixed: Lower res textures appearing on devices - NGui camera is excluded from Texture Streaming computations
- Fixed: All AI controlled vessels (AIPV, freighters, patrol vessel etc) 'fall' when the player approaches them
- Fixed problem that when a passenger initiated a playfield change (teleport/warp), the pilot was not taken with him
- Fixed: Turret targeting other turrets below ground
- Fixed: Texture & colour tool 'Textures' UI glitched
- Fixed: Shooting effects and blinking planet atmosphere
- Fixed: In orbit the players suit light can cause the clouds of a planet to flash between white and black
- Fixed: Accessing and editing an LCD Screen or Projector will activate it, ignoring settings and power
- Fixed: Docked vessels can get moved far away from the parent vessel after a playfield change & remain 'docked'
- Fixed: Players can be disconnected from their vessel if their internet connection drops
- Fixed: [MP] Constructor Input & Output empty when the player quits and re-joins an MP game
- Fixed: Distant planets go black & disappear when viewing from certain angles
- Fixed: Text from LCD screens appearing on other LCD screens
- Fixed: X key already assigned to action message when X key is unbound from shield
- Fixed: AsteroidFieldRing does not rotate for Class 2 and Class 3 planets
- Fixed: AlienBug02 hitbox
- Fixed: Invisible block face 'Sliced corner A2' & 'Sliced corner B2' when next to other blocks
- Fixed: Small container controllers clipping through blocks that are placed over them- 06842: CoQ triggering after entering, exiting then re-entering a planet repeatedly
- Fixed: CoQ when try to open Chat
- Fixed: CoQ prevents loading into playfields with lpf command
- Fixed: {keybind(...)} PDA doesn't work in Chapter Titles/Description (and several other locations)
- Fixed: [MP] Not possible to load into a MP server if character was left on a planet
- Fix for 3rdp camera getting stuck directly above the player's head sometimes (esp. when the player uses the player bike
- Fixed: Motorbikes get caught in a repositioning loop when trying to cross over the poles
- Fixed: Base attacks triggering on a player base whilst honoured with zirax
- Fixed: Access to locker cause COQ
- Fixed: Base attack not appearing after alert triggers (full fix)
- Fixed: Blocks can be placed inside devices
- Fixed: Reloading weapons or tools triggers a CoQ
- Fix for ship not moving in MP
- Fixed: CoQ loop from Drone data
- Fixed: Internal Error when destroying a structure with a selection tool active on any part of the structure
- Fix for terrain showing gaps sometimes
- Fixed: In "New Game Scenario" no Workshop icon in the scenario's list
- Fix for OutOfBounds exception when leaving a playfield
- Fixed: Long render time for structures
- Fixed problem with collider of boarding ramp on playfield server
- Fixed: Gameoptions flag ForvePvP was not considered in choose starter planet window
- Fixed: POI Shield Gen Keeps Resetting
- Fixed: Chunks of structure missing on first visit
- Fixed: Spawner set wrong in POI "Abandoned Excavation Site"
- Fixed: Survival Constructor stuck on backward time skip
- Fixed: shields cycle on & off repeatedly when docked
- Fixed: Copy Paste of multiple LCDs result in wrong order / issue
- Fixed: Previosuly placed Solar panels are not working
- Possible fix for ticks getting out of sync
- Fix for console command 'ticks' not working any more
- Fixed icon size of Sprite selection button in Screen Edit window
- Fixed: When a HV touches the bedrock it will get repositioned above terrain
- Fixed: When a vessel with retractable turrets changes pitch the turrets barrels aim downwards
- Fixed: Game freezes up & stops responding after a player base is taken over by zirax when a new wave is triggered
- Fix for slight camera stuttering when exiting a cockpit in MP in 3rdp
- Fixed: On a client a folder 'Stamps' is created in the 'Saves' folder when connecting to a server
- Fixed: Weapons and tool effects remain after docking
- Fixed: [MP] R2T: Repair console 'last saved', 'Total repair time' & 'Remaining time' don't update when first opened
- Fixed: [MP] The repair bay 'Green' shield gets removed from the vessel it wraps around when a player moves far away & returns
- Fixed: Chapter window does not take CSV key
- Fixed: NoSkip does not work in COOP and bug carries over to SP
Click here for the source of this article RSS Feed